In our previous issue, I concluded the section dealing with condensing solvent and common problems associated with this process. This issue’s article discusses removing unwanted water from the condensed solvent.

WHY IS SOLVENT/WATER SEPARATION NECESSARY?

Garments absorb water in the form of moisture when exposed to the environment. This moisture is transferred to the solvent during the wash cycle, during distillation, vaporized, and then condensed along with the solvent. To remove this water from the solvent stream, some form of separation is required. When two liquids are immiscible (they won’t dissolve into one another), the lighter liquid floats on the surface of the heavier (think oil and water). This principle is used to separate water from solvent in the drycleaning distillation and drying processes and is called “gravity separation.” The efficiency of this type of separation depends on several factors, including the major ones listed below:

Systems designed to separate perc are relatively straightforward with slight variations among most machine manufacturers. The condensed water/solvent mixture is collected in a container where it is allowed to settle. The separated solvent sinks to the bottom while the water floating on top is conducted to a drain tube leading out of the separator for disposal.

Systems designed to separate LIGHTER THAN WATER SOLVENTS are a different matter entirely. It is not possible to offer a simplified description of this type of separation process because each equipment manufacturer has its preferred method of attacking the problems associated with this type of separation. The close values of the specific gravity between that of water and the solvent require:

Well, that’s it for the series on distillation. I’m not sure what our next topic will cover, so please let me know if you have any suggestions for a subject you’re curious about. 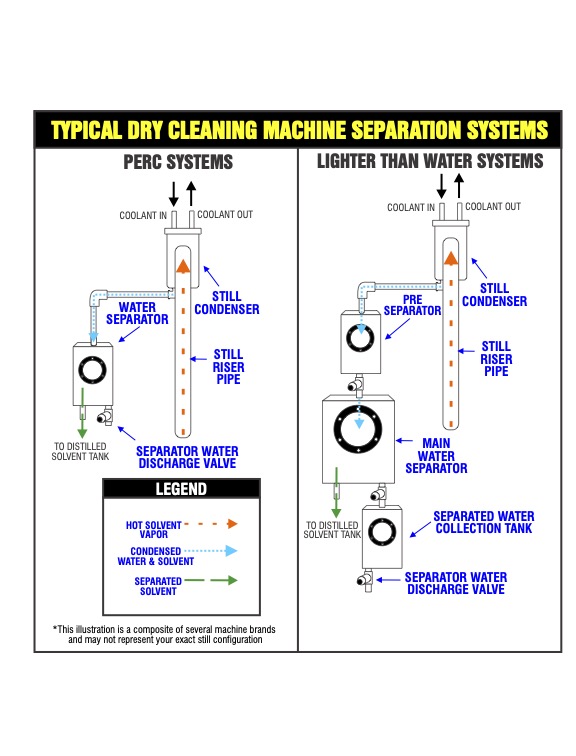 Bruce Grossman is the Chief of R&D for EZtimers Manufacturing. EZTIMERS MANUFACTURES MACHINES THAT MAKE YOUR MACHINES RUN BETTER. For those needing to replace ZERO-WASTE or GALAXYmisters see our SAHARA model, for those with boiler problems, check out our EZ-LEVEL and EZ-DOSE machines.

For further information on EZtimers products visit  www.eztimers.com   Please address any questions or comments for Bruce at bruce@eztimers.com  or call (702) 376-6693.