In my travels as a drycleaning mechanic, one of the more common complaints I hear is the loss of steam pressure caused by low water level in the boiler. Low water level can be caused by several different problems, and in this and follow-on issues I’ll be explaining how to find the cause/causes of low water faults. Causes of this type of fault mimic each other, so finding the culprit is more or less a process of elimination, so I’m going to discuss these problems starting from the fault that is easiest to identify. 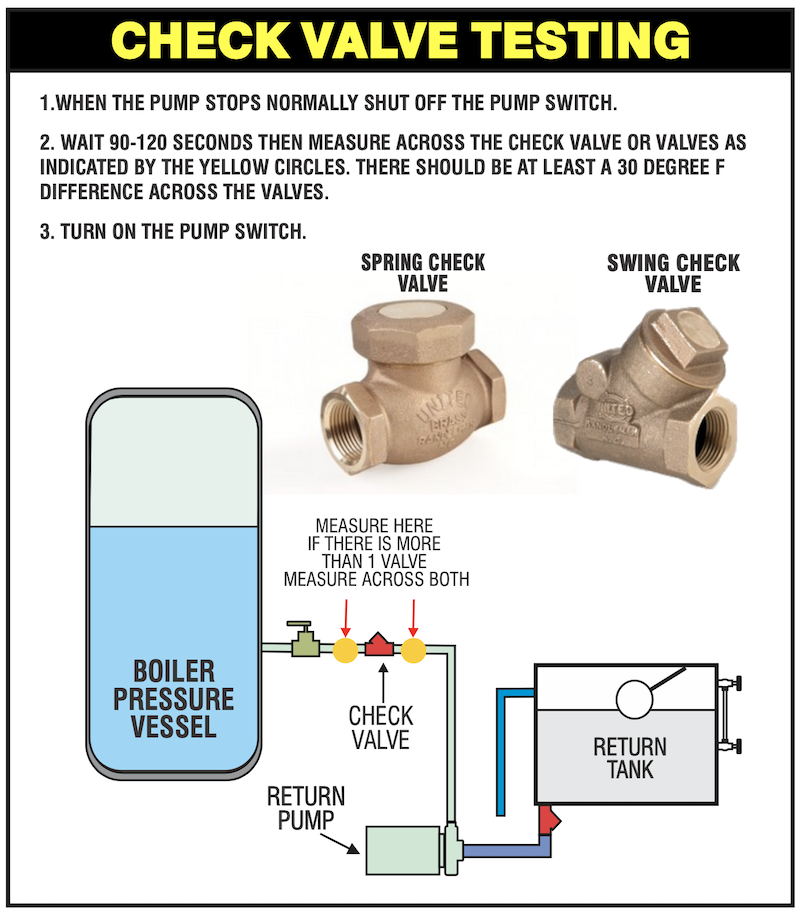 For these reasons, it’s a good thing to monitor the performance of this check valve(s) and replace them when they fail. Fortunately, it’s easy to run a simple temperature test which is a very accurate predictor of the condition of these valves. After the boiler has been in operation for a couple of hours wait for the pump to go on. Immediately after it shuts off turn off the power switch to the pump. Now wait 90-120 seconds and using a laser thermometer as described below measure the temperatures at the points indicated on the accompanying illustration. There should be at least a 30 degree F. difference in temperature between the two points. If there is less, it’s an accurate indication the check valve has a problem. Experience has taught me that it doesn’t pay to try to clean or repair them just replace the faulty valve. It’s wise to have a replacement in your parts stock.

We will be using the laser thermometer again for these measurements. The following paragraph explains the best technique to obtain accurate results.

A NOTE ON BOILER VALVES

Valves used on boilers should be rated at the next higher level of the maximum rated boiler operating pressure. For example, if the rated operating pressure (usually found on the nameplate attached to the boiler) is 150 PSI then the valve would be steam rated for at least 200 PSI. This rating usually appears on the body of the valve after the SWP abbreviation for “steam working pressure” (you won’t find these valves at Home Depot or Lowe’s). THE NUMBERS FOLLOWING THE ABBREVIATION WOG stands for the pressure rated for use with water-oil-gas and is NOT THE RATING FOR STEAM SERVICE.

Bruce Grossman is the Chief of R&D for EZtimers Manufacturing. EZtimers is the manufacturer of the new EZ-LEVEL boiler return tank level control which replaces that troublesome ball float valve in the condensate return tank preventing oxygen corrosion and scaling. Our SAHARA high purity separator water mister/evaporator provides a thrifty, legal method to get rid of the separator water generated by your dry-cleaning machine. See our ad in this issue and for further information on EZtimers products visit  www.eztimers.com   Please address any questions or comments for Bruce to  bruce@eztimers.com  or call 702-376-6693. 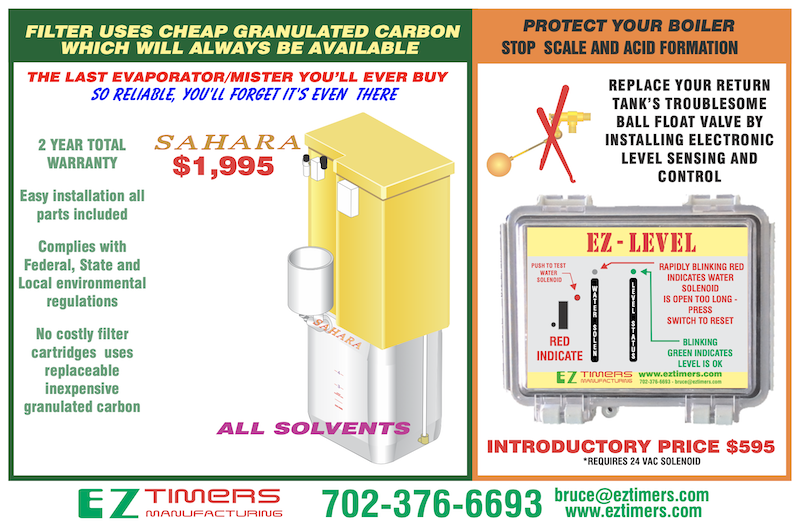