Inside the Drycleaning & Laundry Institute’s Laurel, Maryland, headquarters is what has been called the CSI of drycleaning. It’s the International Textile Analysis Laboratory (ITAL), a high-tech investigative unit of DLI that works backward to figure out how garments and other textile items compromised in processing met such unfortunate ends, much like crime scene investigations.

(goes directly to your Downloads folder)

The goal is to find out why the garment, bedspread or draperies failed, and who was responsible. “We write an explanation of our findings and what the findings mean, and a conclusion on why or where this occurred,” said Jim Kirby, ITAL’s now-retired chief analyst. “Whether it was a manufacturing defect, or if the consumer did something in use or storage, or if the person who cared for it made a mistake.”

To submit an item for analysis, operators fill out a one-page form and send it in with the garment. Upon arrival at ITAL, analysts invoice and tag the item, then route it to a specific area of the lab based on the nature of the failure. “Complaints are different from garment to garment, so the protocol depends on the complaint,” Kirby said. “For instance, if a customer complains that a red dress is no longer as red as it once was, the analyst will run colorfastness tests according to ATSM and AATC standards.”

ITAL uses a full complement of equipment and chemicals to reproduce the care process in controlled conditions, plus specialized equipment and chemical indicators that can reveal the presence of deleterious materials and stress factors. “We have every piece of equipment in the textile-testing world at our access,” Kirby says. “We use at least two microscopes [and] a SpectraLight machine that generates six different light spectra to look at the textiles.”

“It is a little bit like CSI,” said David Machesney, owner of Pratt Abbott Cleaners in Westbrook, Maine, and Past DLI President.

After testing, the ITAL analyst writes a report on his findings, and sends the garment back with the report. The entire process typically takes less than two weeks for drycleaners in the continental United States; rush services and expedited shipping are available. “The lab turns it around quickly, and with [e-mail], you can have the report back the same day it’s tested,” Machesney said.

An analysis is usually ordered in response to a customer claim. If the operator and the garment’s owner can’t work out a satisfactory arrangement, they can send the item to ITAL to help work things out. “We’re an independent laboratory,” Kirby said. “We take no hearsay evidence from the retailer, the manufacturer or the consumer—only what we find in the laboratory. We try to resolve complaints and pinpoint problems.”

ITAL has the final word on whether or not the care process, a manufacturing defect, or the customer caused the garment failure—and the customer may indeed be right. The lab’s analyses “have helped us save thousands of dollars over the years on claims we shouldn’t have paid,” said Norman Way, director of operations at Puritan Cleaners in Richmond, Virginia. “But it’s also helped us to be able to take care of customers when we find out that it was our fault, and we were able to learn from that.”

Machesney’s plant recently had a $600 dress exhibit a substantial color change in processing, and he approached the boutique that sold it to express the suspicion that the dress was labeled “Dryclean only” incorrectly. “She said, ‘We have never had a problem,’ and whipped up the customer against us,” he says. “I said, ‘We’ll pay the claim, but let’s send it in.’”

ITAL confirmed that the dress wasn’t made to withstand routine drycleaning procedures and shouldn’t have carried a label specifying drycleaning. “The manufacturer made good on it, and I didn’t have to write a check,” Machesney said. “The customer was just delighted, and the manufacturer was delighted. The shopkeeper had a little bit of egg on her face, but it lent huge credibility to our organization. 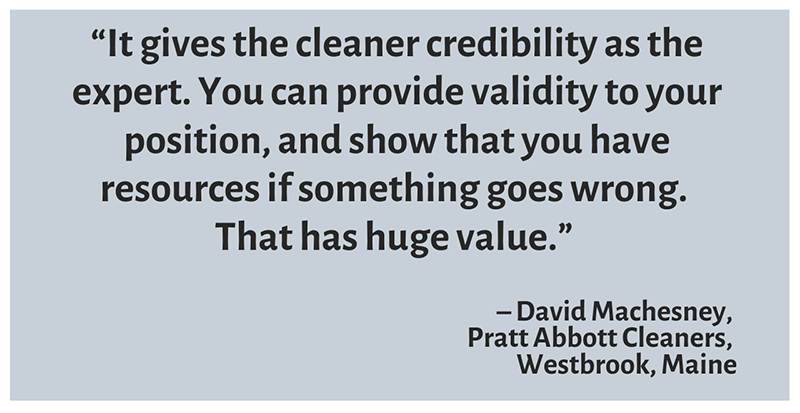 “It gives the cleaner credibility as the expert,” Machesney continued. “You can provide validity to your position, and show that you have resources if something goes wrong. That has huge value. We try to treat people fairly, but it’s not the money—it’s the credibility it builds with customers, and hopefully with the boutiques in your area.”

Pratt Abbott sends eight to 12 garments in for testing per year, and often uses mysterious garment failures as a challenge for employees. “We use it as a training tool,” Machesney said. “It gives us a chance to say, ‘Okay what do you think went wrong?’ Then I’ll tell them, ‘Let’s send it in and see if we got it right.’ Sometimes we get it; sometimes we don’t. Sometimes, [the item] will come back with a suggestion.”

DLI members may not be taking enough advantage of the lab’s capabilities, he says. “A lot of managers don’t want to send [garments] in because they think it costs money,” Machesney says. “That’s pennywise and pound-foolish. Better cleaners are spending more time training staff, and using our online services to educate. But a lot of that stuff goes hand-in-hand with the lab.”

ITAL also informs manufacturers of its findings to help them make better garments. The data collected at the lab adds to DLI’s already considerable repository of drycleaning knowledge, providing topics for its Not in Vogue and TABSnewsletters that cleaners can reference repeatedly. “What we see here, we turn into a variety of bulletins,” Kirby said. “It helps our members explain problems to the consumer, and if it was the cleaner’s fault, they can learn from it.”

By publishing ITAL’s results, DLI addresses many concerns without additional analysis—but there will always be more problem garments. “It would be helpful if more drycleaners would send in more garments, so that if we have manufacturer-specific problems, we can get that information out to the industry,” Machesney said. “Cleaning is going from a necessity to a luxury item,” he added. “And when you’re working in a luxury business, the expectations are far greater. As pieces dwindle and the price per piece rises, customers expect more out of us. We’re not just cleaners—we provide solutions to garment care.”

[bio] Ian P. Murphy is a freelance writer and editor based in Chicago. He served as the editor of American Drycleanermagazine from 1999-2011.