Sponsored walkways have long been a great way to honor the influencers of a particular industry. Recognizing the people and companies who have given their all to excel in the vocation or métier, such walkways offer gratitude for work that elevated the industry to the benefit of everyone that followed.

DLI launched its own memorial walkway, Legacy Lane, in 2005 during the 2005 Clean Show. Inspired by the bricked walkways at the churches, parks and playgrounds of his hometown, Columbia, Maryland., “We thought it was a neat idea, and wanted to do the same for the association,” says Jon Meijer, DLI’s Director of Membership. 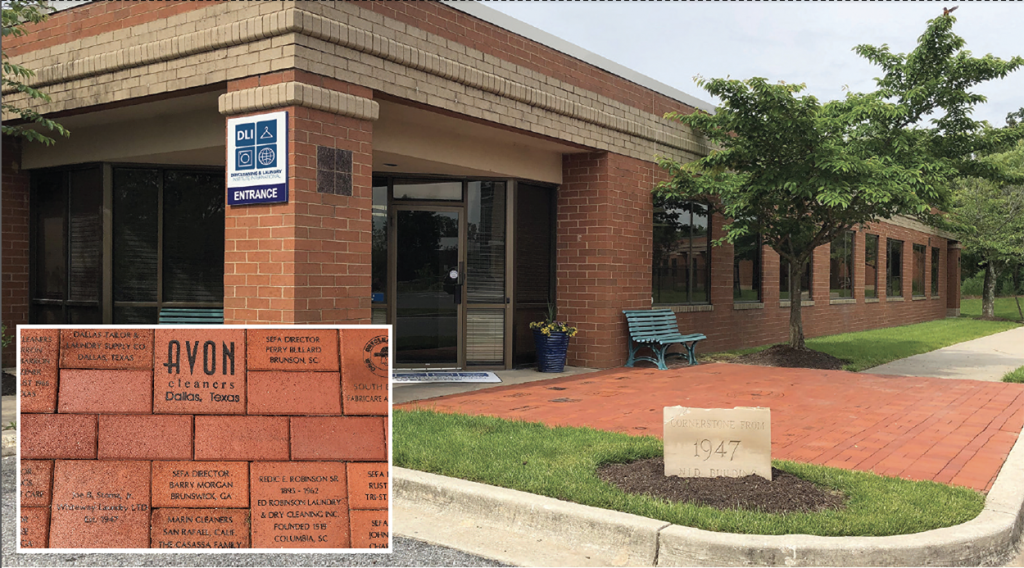 Legacy Lane was an instant hit, adding more than 200 laser-inscribed bricks over the years that ensued; it was even relocated to a more prominent location at the entrance to DLI’s headquarters to accommodate more dedicated bricks. And it continues to be a fantastic way to recognize industry accomplishments of all kinds.

Like the stars on Hollywood’s Walk of Fame, the bricks of Legacy Lane showcase the achievements of individuals and companies past and present. The bricks are a wonderful recognition for anyone who “has a connection” with DLI, Meijer says.

Many bricks, of course, serve as a memorial to industry innovators who passed away after long and fruitful careers in dry cleaning and laundry. For example, one 8” x 8” brick in Legacy Lane reads, “Redic E. Robinson Sr., 1893–1962, Ed Robinson Laundry and Drycleaning Inc., Founded 1919.”

But you don’t have to be six feet under to find your name underfoot. “I think sometimes it seems like you need to be dead to have a brick,” Meijer says. “But most people with a brick are alive and well. By and large, most people want to dedicate a brick to say, ‘This is my cleaner, or this is me.’ Yours might say, ‘XYZ Cleaners, Founded 1900.’”

Individuals with Legacy Lane bricks include industry vanguards past and present — people such as John L. Corley, Gary & Joan Dawson, Jim Patrie and others. Prominent companies from the allied trades also appear: Adco, NIE Insurance, R.R. Street & Co. “It’s all across the board,” Meijer says.

Bricks can be purchased to memorialize those who have gone before, recognize a person or company active in the industry today, a commemorate an important achievement or anniversary. “It’s individuals, dry cleaning plants and people who worked in the industry or the allied trades who buy bricks,” Meijer says.

Regional affiliates often order bricks to commemorate leadership positions and other milestones. Many are bought by dry cleaning operations in their own names. They also make great gifts for anyone wishing to recognize the exceptional contributions of a person or company in the industry — anyone “who paved the way.”

DLI orders bricks as requested every four to six months, and installs them following the spring thaw. “These bricks last,” Meijer notes. “They never crack, they don’t fade, and the laser etching lasts forever. And we powerwash Legacy Lane periodically to keep it looking clean and professional.

Contact Jon Meijer at (800) 638-2627 or JMeijer@DLIonline.org for more information about Legacy Lane and ordering information.

Ian P. Murphy is a freelance writer and editor based in Chicago. He edited American Drycleaner from 1999–2011.