On many levels, Milt & Edie’s Master Drycleaners is a remarkable drycleaning business. Purchased by Milt Chortkoff in 1988 and renamed in honor of his wife in 2004, today’s store at the busy intersection of Alameda and Pass in Burbank, California, has tons going for it. Two of the more salient features of the business are its physical location and nearly obsessive approach to customer service. Visible from blocks away due to the bright magenta color scheme of its many signs and banners, most of the building’s external areas such as gables and walls support placards advertising that the company is open 24/7/365 – all day, every day. Even before you step inside you can smell the fresh cookies, hot coffee, and buttery popcorn. As soon as you enter through the automatic doors the maitre d’ is asking you how they may be of service, whether you’re in for picking up, dropping off, or tailoring. 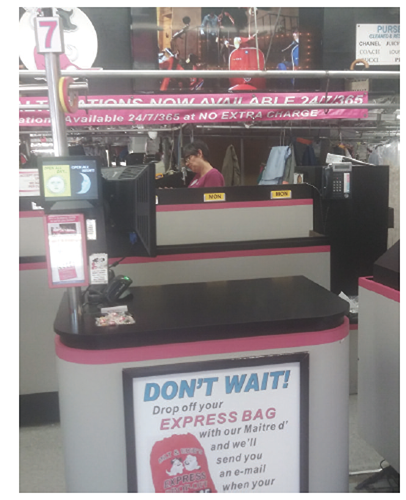 Store manager Richard, who took a few minutes out of his busy schedule to show me around, mentioned that Milt & Edie’s is the busiest shop in Southern California, and probably the U.S., and probably the world. Part of the reason for success of this magnitude is its proximity to a number of major television and movie studios. Not only does the drycleaners regularly cater to the entertainment stars and studio executives who live and work nearby, it also handles jobs for various wardrobe and costume departments that often require expert tailoring services at unconventional hours. This is likely why the company employs a team of fifteen experienced tailors, four of whom are on hand at any one time.

Entertainment business professionals constantly ask permission to shoot inside the shop, according to Michael Schader, Milt’s son-in-law. After all, the drycleaners is a character unto itself, packed as it is with low-hanging pipes running every which way, blaring flat-screen TVs, and a maze of conveyor belts bearing plastic-wrapped garments. Until recently he’d always refused, arguing that to shut down the operation for a week or even a day would unwisely inconvenience his regular clientele.

When the Ellen Degeneres show asked permission to stage a ‘celebrity’ prank in the store, and promised to be as unobtrusive as possible, management just couldn’t say no. For a week before the event, unmarked vans drove up carrying technicians who scurried around the store installing cameras and tweaking settings, troubleshooting errors or adjusting microphones. Schader and his wife, Beth, had been sworn to secrecy. “I told our staff we were upgrading our closed-circuit television (CCTV) system,” he said, “and of course they believed me.” Once everything was set up just right, the show signaled the prank was imminent.

“I was in a position to select the person who would serve the celebrity once she came into the shop,” Schader said. “I chose Alexis because of her stellar personality and just how nice and patient she is with everyone around her.” About a half hour before her arrival, Schader says he’d figured out who the celebrity was going to be. “Melissa McCarthy is a regular customer at our store, and she’s a very nice person,” he said, which made her Schader’s most likely candidate for someone wanting to have a bit of fun at the local drycleaners. The celebrity arrived, Alexis handled the prank with flying colors, and everything was going smoothly until Ellen told Melissa to pretend to lose consciousness. At this point Alexis, visibly concerned about the health and well-being of her customer, asked a coworker to call 911.

For a number of reasons, Ellen Degeneris invited the employee on the receiving end of the prank, Alexis Symmonds, to come onto her show and talk about what had happened (segment available here). “Milt & Edie’s web and social media traffic went through the roof in the week following the prank as tens of thousands of people from around the world clicked over to check out the company page after watching the prank itself,” Schader said, “but, otherwise, the prank was nothing much, kind of a non-event.”

Being part of the entertainment industry means maintaining your focus and keeping your cool, no matter what. Regrettably, Symmonds had already given her notice before the prank occurred. She is no longer employed at Milt & Edie’s Master Drycleaners in Burbank, California. She will surely land on her feet with her caring demeanor and a little help from a $20,000 from Shutterfly and Ellen.