This issue I’ll be talking about how to locate faulty check valves in your boiler’s condensate return system. The purpose of a check valve is to limit the flow of water to one direction which is usually indicated by an arrow stamped into the body of the valve which indicates the direction of water flow. These types of valves are used between the boiler return pump and the boiler pressure vessel with the direction of flow towards the boiler. When the boiler’s water level drops lower than the pump activation sensor the pump motor turns on and the pump pulls water from the return tank and pushes it through the check valves into the pressure vessel of the boiler. 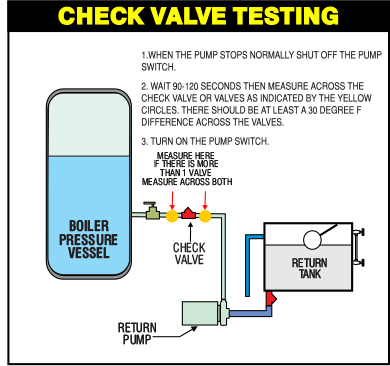 Unfortunately, steam systems generate a lot of scale and steam and return pipes continuously shed large particles of rust and other bits of metal as well. This detritus often finds its way into the internals of the check valves causing them to partially fail, allowing water to be pushed out of the boiler pressure vessel into the return tank. This valve “blow by” is costly in wasted energy with steam boiling away in the return tank. In addition, the superheated water forced into the return tank overheats the water in the return tank often causing the return pump to “cavitate” and not be able to refill the water in the boiler pressure vessel. When the water level drops low enough, the boiler will shut down on a low water fault causing expensive loss of plant production due to boiler down time.

For these reasons it’s a good thing to monitor check valve performance and replace them when they fail. Fortunately, it’s easy to run a simple temperature test which is an accurate predictor of your valve’s condition. After operating the boiler for a couple of hours wait for the pump to go on. Immediately after it shuts off turn off the power switch to the pump. Now wait 90 seconds to two minutes. Using a laser thermometer as described below, measure the temperatures at the points indicated on the accompanying illustration. There should be at least a 30-degree F. difference in temperature between the two points. If there is less, it’s an indication the check valve has a problem. Experience has taught me that it doesn’t pay to try to clean or repair them – just replace the faulty valve. It’s wise to keep a replacement in your parts stock. There’s a paragraph below on the specifications for valves used on boilers. Pay attention to them for your own safety and rememberNEVER WORK ON A BOILER OR ANY PIPING THAT IS HOT OR UNDER PRESSURE!

We will be using the laser thermometer again for these measurements. Please read the following paragraph for the best technique to obtain accurate results.

1.The surface of the target should NOT be a highly reflective color like silver or white or have a highly polished finish like chrome or stainless. If it does, take a black permanent marker and blacken an area about the size of a quarter, use this blackened area as the target spot on the surface to be tested.

2.The laser pointer is normally used to select the target area and illuminates the center of the sensed area. Since the sensor itself measures all of the infrared energy entering the lens it becomes progressively more accurate the closer you place the sensor to the target area. When using the laser thermometer to run these tests be sure to position the lens of the thermometer slightly above the surface of the area being measured, don’t just aim it and use the laser pointer to take the temperature.

A NOTE ON BOILER VALVES

Valves used on boilers should be rated at next higher level of the maximum rated boiler operating pressure. For example, if the rated operating pressure (usually found on the name plate attached to the boiler) is 150 PSI then the valve would be steam rated for at least 200 PSI. This rating usually appears on the body of the valve after the SWP abbreviation for “steam working pressure” (you won’t find these valves at Home Depot or Lowe’s). THE NUMBERS FOLLOWING THE ABBREVIATION WOGstands for the pressure rated for use with water-oil-gas and is NOT THE RATING FOR STEAM SERVICE.

Bruce Grossman is the Chief of R&D for EZtimers Manufacturing. EZtimers is the manufacturer of the EZ Level return tank water level control which replaces the troublesome ball float valve in the return tank. The SAHARA and DROP IN THE BUCKET line of high purity separator water mister/evaporators also the TATTLER steam trap tester an accurate and easy to use device are also part of our EZtimer product line. See our ad in this issue and for further information on EZtimers products visit  www.eztimers.com   Please address any questions or comments for Bruce to  bruce@eztimers.com  or call 702-376-6693.