Last issue, I concluded the article at the beginning of a discussion on the impurities associated with boilers. This month we’ll delve deeper into what some of these impurities are, allowable limits for proper boiler operations, how to control them, and the type of damage they cause.

Read Part One of this series here.

Feedwater: combination of fresh makeup and condensate returning to the return (condensate) tank.

Boiler Water:water contained inside the boiler itself which will be converted to steam.

You might say, “That’s quite a list of things I know nothing about. Lacking a degree in chemical engineering what can I do about it?” Well, the answer is not much as far as the chemistry of the new or make up water is concerned, it depends on the local water supply. However, the good news is, commercially available boiler treatments, generically called “boiler compound” and water softening devices do an excellent job keeping your boiler in tip top condition and are readily available.

In most cases providers of boiler compound and water softening services will take water samples from your steam system and analyze them in order to set up the proper dosing schedule to maintain proper boiler chemistry. Water testing should be done every few months at a minimum. If you own a water softener instead of using a service, most large swimming pool supply houses will be able to test for hardness often at no charge. Now that you’re aware boilers need the proper water chemistry and there are effective means to treat the water in order to provide the proper chemistry, what could go wrong? Plenty, and the next section will suggest how to avoid problem. 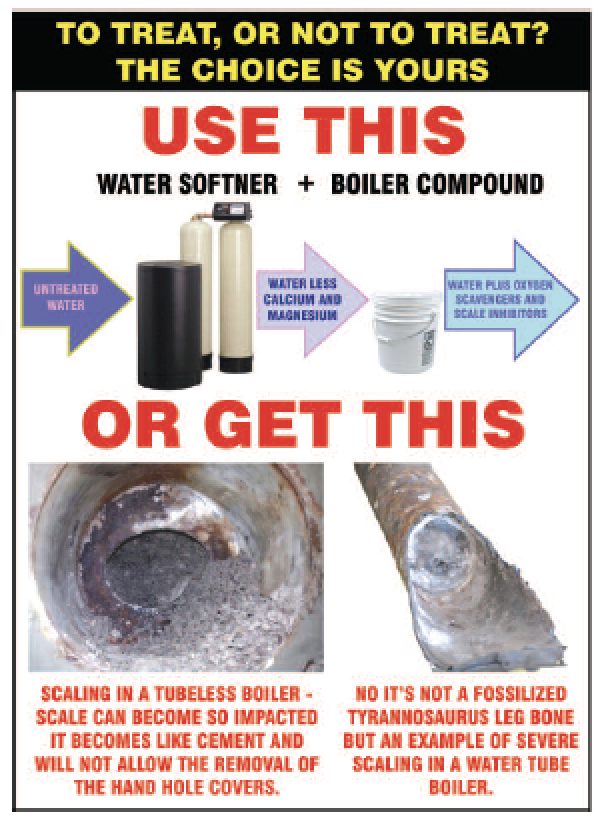 Here’s two most common bad actors found in makeup water that you have the ability to control:

Dissolved Oxygen: Oxygen dissolved in feedwater attacks the steel in the boiler and the feedwater system and causes a condition described as “pitting.” The pits produced can vary from tiny depressions to holes large enough to penetrate the boiler metal and are usually covered with pimple-like bumps of rust.

Once pitting starts, it may be extremely hard to arrest and can proceed at a rapid rate. Sodium Sulfite is used to remove the dissolved oxygen left in the feedwater. It reacts chemically with dissolved oxygen binding it so it’s not available to destroy metal. Dissolved oxygen control is based on maintaining a level of sodium sulfite in the boiler water. It’s important that the feedwater and make up water are mixed thoroughly and as quickly as possible so that sodium sulfite binds feedwater oxygen before the oxygen can cause damage to the boiler. With this in mind it is far better to add compound to the return tank using a metering pump when new makeup water is added to the return tank or when the return pump is pumping water into the boiler than it is to add the compound manually a couple of times a day.

When water is heated the dissolved oxygen is driven off therefore condensed steam (condensate) flowing back to the condensate return tank is essentially oxygen free. Only new, untreated make up (city) water adds the damaging oxygen. Constant addition of new water caused by leaky ball float valves (Roberts Valve) found in almost every return tank is a boiler killer. In order to prevent pump cavitation caused by high return tank water temperature, uninformed operators sometimes run a stream of new water into the return tank to cool it. Leaky ball float valves (Roberts Valve) and return tank water cooling using this method will KILL BOILERS by overwhelming the capacity of the boiler compound to treat the water; both by adding large amounts of oxygen and also diluting other boiler treatment chemicals.

Both of the methods listed above are defeated by excessive volume of new untreated water entering the return tank. Once again the culprit is usually the fault of the ball float valve (Roberts Valve) leaking.

Bruce Grossman is the Chief of R&D for EZtimers Manufacturing. EZtimers is the manufacturer of the new RETURN TANK SENTINEL, a wonderful device essentially ends lost production by boiler shut down caused by most boiler return pump failures.  The EZ Level return tank water level control which replaces the troublesome ball float valve in the return tank. The SAHARA and DROP IN THE BUCKET line of high purity separator water mister/evaporators also the TATTLER steam trap tester an accurate and easy to use device are also part of our EZtimer product line. See our Ad in this issue and for further information on EZtimers products visit  www.eztimers.com  Please address any questions or comments for Bruce to  bruce@eztimers.com or call 702-376-6693. 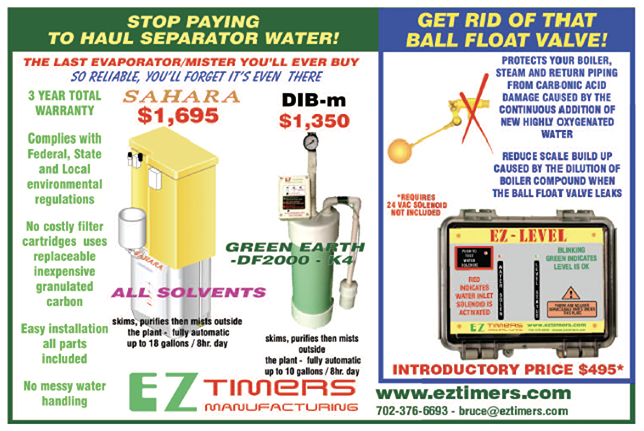