“For His Deep Commitment

To Helping People Succeed In

the South Eastern Fabricare Association Southern Drycleaners & Launderers Show. Through the course of his life, Bell repeatedly demonstrated his passion as a champion for every cleaner. His belief in a better industry caused him to strive to develop certification programs cleaners could use to offer the best, and safest, services.

At 86, Buster keeps his finger on the pulse of the industry by calling on contacts in every corner of the country and every aspect of the business. Eldridge Cannon of Cannon’s Costal Cleaners in Brunswick, Georgia, said Bell will talk to a soap manufacturer and find out what’s new with detergents. He’ll know about new equipment before it becomes public. He warns cleaners about problem garments because his friends in the industry will mention this to him. “He might say, Houston, Texas, is seeing this sort of problem with jeans. You may want to look out for that,” Cannon said.

Cannon said any cleaner willing to listen to Bell will benefit. “He will push you to the next level in any part of the business, be it customer service, automated bagging, cleaning quality, you name it,” he said. It can be hard for an operator to see his point when they’re feeling overwhelmed with personnel problems, equipment issues, or other problems, but his advice always leads to a better bottom line, Cannon said. “He’s a giver. He just gives and gives and gives and asks for nothing in return,” he said. “I can never repay all he has done to help me grow my business. Buster’s help has made me millions,” he said.

Fabritec’s John Jordan said Bell’s commitment to quality raises the bar for the entire industry. “He’ll tutor anyone who wants to learn,” he said. “His innovations and boundless energy make him a great mentor for young cleaners and people who want to produce the best quality,” he said. Jordan thinks of Bell as a research engineer for the industry, “We call him Research South,” he said.

Bell’s mother started Bell Laundry & Cleaners business in 1940. Her father and uncles had been cleaners before her. Bell joined the company in 1954 and added drycleaning in 1957. A fire burned the business to the ground in January of 1966. The family reopened the business by October that year.

DLI salutes Walter “Buster” Bell and thanks him for his countless contributions to the industry. DLI’s Diamond Achievement Award is a rare honor reserved for the most exemplary industry service. It has only been presented to a handful of industry legends. Bell joins the company of Barney Deden (1999), Stan Golomb (2001), Chris Edwards (2005), Jeff Miller (2007), Sid Tuchman (2011), Don Fawcett (2015). DLI intends to present a posthumous Diamond Achievement Award to Milt Chortkoff’s family at this fall’s California Cleaners Association convention. 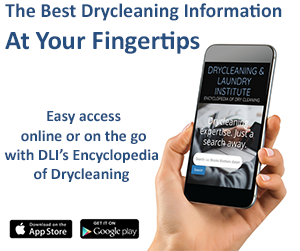