It’s a fact in the drycleaning business: Garments can—and do—fail. Operators can take every precaution to head off potential problems, but once in a while, something will go wrong. In the best case, the drycleaner can fix the damage and return the garment; in the worst, the plant will have to reimburse the loss or replace the item.

This is a difficult conversation to have with customers who care about their clothing. They won’t like the fact that a favorite garment is no longer wearable—and having asked the drycleaner to return the item in clean, refreshed, like-new condition, they tend to blame their cleaner for the problem.

“All they know is that they gave the garment to you and it was fine; you gave it back, and it wasn’t fine,” said Brian Johnson, DLI’s Director of Education & Analysis. “ ‘It can’t be the manufacturer—this is Versace,’ they’ll say. So it has to be you—the drycleaner.”

While the FTC’s Care Label Rule requires the listing of at least one useable cleaning process on the garment label, manufacturers often rely instead on assumptions about garment construction that are proved wrong in processing. “One of the biggest problems is incorrect care instructions,” Johnson said. “The label may say to dryclean, and the manufacturer has used a component or a dye or a trim that is not drycleanable.”

“It is not unusual to have garments that just aren’t made correctly,” said Lorraine Muir, instructor at DLI’s School of Drycleaning Technology. “It isn’t intentional on the part of the manufacturer; they think the materials will work. But when you put them together in a garment, something is just not working.”

The most common problem is dye bleeds. Most often associated with black-and-white garments, bleeds can happen on any high-contrast color combination, whether it’s navy and white, red and white, black and yellow, or brown and pink. “Any time you have contrasting colors side by side, proceed with caution,” Johnson said.

“Say a black skirt and a white top are sewn together, but the black skirt bleeds onto the white blouse when you dryclean it,” said David Suber, owner of Perfect Cleaners in Los Angeles. “The label says ‘Dryclean only.’ That is a manufacturer problem, because they put together two pieces of material that can’t withstand the cleaning process.”

Many issues won’t reveal themselves until the garment is cleaned, such as polyester or urethane coatings that blister and peel in the dry cycle. “Sometimes the part that fails is hidden inside, and you don’t even see it,” Johnson said. “You won’t even know it’s in there until the damage is done.”

Consumers are also to blame for garment failures. They forget about stains or attempt to remove them on their own, making removal nearly impossible for drycleaners. They leave garments vulnerable to moth, moisture, and light damage. And they use tinctures that degrade and discolor fabric. “People forget what [their clothes] might have been exposed to,” Muir said.

For instance, a kimono came to DLI’s lab recently after disintegrating in cleaning thanks to damage from light. “It happens a lot with draperies,” Muir says. “Some of the yarns flushed out in the cleaning process because they were so weak from light exposure.”

Personal care products such as lotions and hair treatments often contain mild bleaches, and users splash them on clothing without knowing it; later, the cleaning process flushes out both bleach and dye. Similarly, products such as sunblocks and aftershaves can contain ingredients that darken when heated, producing discolorations in drying. Underarm stains and friction are problems, too.

“Customer problems are usually yarn slippage in silk or perspiration under the arms due to alkalis in the body and aluminum chloride in antiperspirants,” Suber said. “[On] friction areas, the yarns become loose and can’t withstand mechanical action. Look for areas of wear across the back and elbows. You can see it if you hold it up to the light.”

No operator can guarantee zero failures, but they can use their skills and experience to make them less likely to occur. At the counter, look for “red flag” components such as fancy beads, sequins, and buttons; polyurethane coatings; contrasting colors and stains; localized fading and/or wear; and chenille, fringe, and unfinished edges.

If there’s any doubt that a garment will survive the cleaning process intact, test. “Test all red flags,” Suber said. “Quite often, the labels are wrong because manufacturers don’t test. I’ve seen people test the cuffs but not the lining on a silk acetate windbreaker, and the black lining bleeds. You’re supposed to be the professional, so test even if the label says ‘Dryclean only.’”

“If you know how to handle an issue, you can eliminate it,” Hallak said. “You have to learn a little about garment construction and read the care label. Know that nonvisible things may be a problem. There are things that are not foreseeable, and there are others where you should know better.”

Be prepared to go against care label instructions when necessary. “There are options in wetcleaning and hand-cleaning,” Hallak said. “Let’s say you have a beaded gown that really doesn’t need to go through cleaning. Take it to an ironing board or pressing machine and lay it flat. Go over it with a damp picrin towel. Spray the underarms, and you’re good to go. I tell my guys that if they are not hand-cleaning at least 20 to 30 items every day in the summertime, they are doing something wrong.”

Drycleaners should inform the customer of the risk involved with a particular garment and the potential consequences before attempting to clean it whenever possible. “It’s easier to have that conversation ahead of time than after the fact,” Johnson said. “If you try to talk to them after a failure occurs, good luck on that conversation.”

Muir suggested showing the customer the appropriate DLI Bulletin to explain potential issues. “It’s better to tell them upfront,” she said. Counter staffers can ask production personnel about garments that might present problems. “Back each other up. They might not know from experience, but can recognize what they need to question.”

Hallak’s counter reps hang any garment that looks questionable, instead of throwing it into the general cleaning bin. “You can train your counter people, but the bottom line is that they are not your technicians,” he said. “Your cleaner or spotter has to have enough experience to look at something and know.”

If a garment is deemed risky, operators can (tactfully) ask the customer to sign a release. “I tell the customer that I’ll take a release because I do know what I’m doing,” Hallak said. “Educating the customer doesn’t absolve you of carelessness, it’s just saying, ‘I see this and this as a potential problem.’

“You don’t want to scare the customer,” he added. “You don’t want to make it look like they’re taking their chances every time they come in. I tell them that the integrity of the garment is all I care about. If I have to hand-clean it due to the fiber content and we can only get it 80 percent better, that’s what we’re going to do.”

The Fix Is In

Even with precautions, problem garments can get past the best operators. And that’s when the drycleaner will need to reverse the damage, replace the garment, or reimburse the customer—no matter whose fault the failure was.

“When we follow the care label and something gets ruined, we believe that it’s the responsibility of the manufacturer to step up,” Hallak said. “But when we go to the manufacturer, it tarnishes our reputation. We try to correct whatever we can.”

His plant recently handled a $4,000 dress that had glued-on paillettes that were stripped in cleaning. “They shouldn’t have cleaned it,” Hallak said. “We were lucky enough to go downtown and find close to the same thing—an iron-on paillette. It took a couple of hours, but we put them all back on, and it looked gorgeous.”

Some garments can’t be saved, he notes, like a red, black, and white sweater that had its black dyes bleed into the reds during extraction. “When something like that happens, there’s nothing you can do about it expect go on eBay and find another one just like it.

“Extraction is the cleaner’s worst enemy,” Hallak added. “When you extract a garment, it adds centrifugal force and pulls the dyes through the garment. That’s where you get dye transfer. If you have multicolored things with trim, whether drycleaned or wetcleaned, you have to do minimal extraction.”

“Sometimes on the black-and-whites, you have to take the garment apart clean the white part separately, restore it, and sew it back together,” Suber said. “Sometimes you can reclean it, and [the dye bleeds] will flush out. But the proper approach is to try to restore it and let the customer know.

Similarly, when a garment is beyond repair, the cleaner can’t avoid the issue or send a ruined garment home in the hope that the customer won’t notice. Instead, they need to alert the customer immediately, and have a plan ready to make things right.

“I had a woman’s wool topcoat that had belt loops coated with vinyl polyurethane, and the belt loops peeled in cleaning,” Suber said. “We went to the customer and found an alternative to fix it—we made wool belt loops. Now it won’t happen again.”

“If we have a problem, we tell the customer immediately,” Hallak said. “The consumer’s job is to purchase, and we want them to purchase whatever they’re going to purchase. If we know what we’re doing, the more expensive the garment, the more we get to charge to clean it.”

Ian P. Murphy is a freelance writer and editor based in Chicago. He served as the editor of American Drycleaner from 1999-2011. 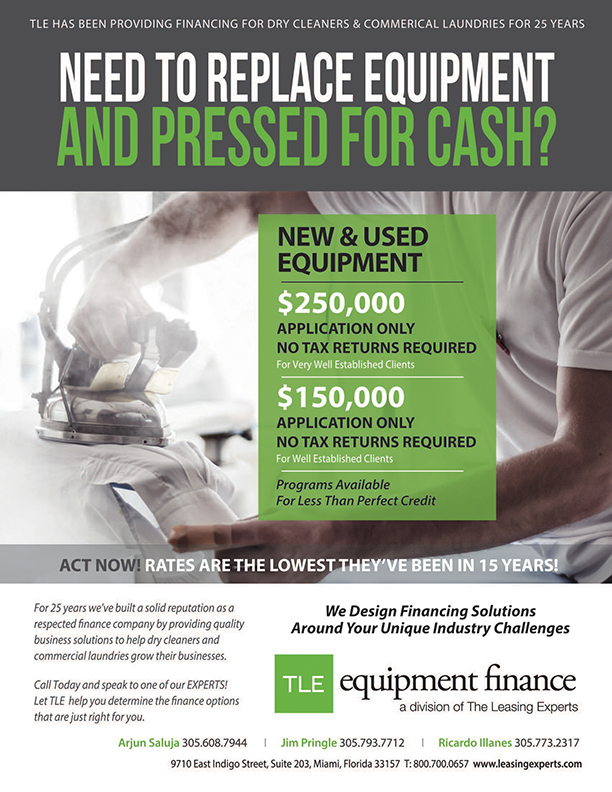